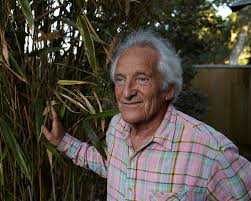 Sim Van der Ryn, architect, is a visionary, author, educator, public leader, internationally distinguished pioneer in ecological design, and professor Emeritus, Environmental Design, UC Berkeley, where he taught from 1961 to 1995. For more than 40 years, Sim has been at the forefront of integrating ecological principles into the built environment, creating multi-scale solutions driven by nature’s intelligence, and was an early advocate of post occupancy evaluation of buildings so we could learn how buildings actually affected people and their health.

He has served as California’s first energy-conscious State Architect, authored seven influential books, and won numerous honors and awards for his leadership and innovation in architecture & planning. Sim’s collaborative approach and meta-disciplinary accomplishments help show the way to an evolving planetary era that values both the integrity of ecological systems and the quality of life.

A recent New York Times profile writes, “Long before sustainability became the buzzword du jour, there was Sim Van der Ryn, the intrepid pioneer on the eco-frontier”. The 70-year-old architect is part of a generation of visionaries who are more interested in the long term value of their work than in self promotion. Sim emphasizes, “We are engaged in an Ecological Revolution , every bit as profound as the preceding Industrial Revolution.” While addressing an assembly of architects, Sim states, “The worst thing you can do is keep making no changes. That’s where the risk lies.”