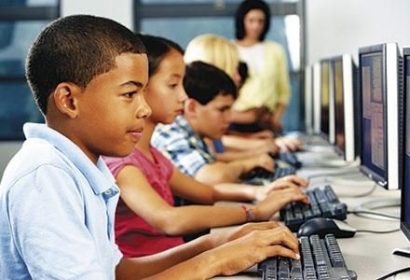 About WiFi In Your Child’s School

A primary responsibility of being a parent is diligently protecting the safety and well-being of your children. We spend a lot of time teaching our kids techniques for navigating dangerous situations, scrutinizing the individuals and institutions we temporarily entrust them to, showing them how to eat right, looking after their personal hygiene and so on. When it comes to a rising new concern that could potentially contribute to a host of health complications, we owe it to ourselves, and our kids, to listen and learn.

Electromagnetic fields (EMF) are a form of radiation or invisible area of energy associated with the modern use of electrical power. Common sources of EMF radiation include power lines, computers, cell phones and wireless Internet (Wi-Fi) networks. While most of us over the years have probably heard rumblings of the possibilities of negative health effects attributed to high levels of exposure to EMFs, little definitive word has reached the mainstream stamping it as a legitimate concern. But in a world in which experts estimate we encounter 100 million times the exposure to artificial EMF radiation than our grandparents did, there’s never been a more critical time to take a closer look.

A Voice of Warning

One person who has been fighting to get the word out about pervasive negative health implications relating to EMFs and Wi-Fi in schools is Camilla Rees. An investment banker by trade, Rees realized she has a particular sensitivity to EMFs about seven years ago. Since then, she’s dedicated herself to learning as much as possible about the science and research regarding EMF exposure and relating the facts in everyday terms people can understand, founding electromagnetichealth.orgalong the way.

“It’s hard once you know something that is very important happening to society to turn a blind eye to it,” says Rees, who feels certain EMF radiation poses a threat. “You have to ethically move to educate people, raise awareness and try to move things in the right direction.” And with institutions ranging from daycare centers and grammar schools all the way up to colleges and universities racing to remain on the cutting edge by upgrading to campus-wide, industrial strength Wi-Fi, there’s a growing number of concerned individuals desperate to get to the truth.

What We Know About EMFs

According to Rees, the first thing to understand about this complex and often controversial topic is radio frequency radiation is biologically active. “We know for certain, it’s absolutely unquestionable,” she says, citing more than 20,000 studies.

“We think of ourselves as solid beings, but we’re actually electromagnetic,” Rees explains. “And when there’s an energy source that’s more powerful than the delicate balance in our bodies, it causes disruptions. So as a result, you’re going to see every system potentially being affected.”

From cancer risks and behavioral changes to cardiovascular irregularities and sleep disorders, Rees offers a laundry list of related concerns that includes many of the most prevalent medical conditions plaguing our society. “Chronic illnesses have skyrocketed since the mid-1990s when all this technology started to proliferate,” says Rees.

Martha Herbert, an assistant professor of neurology at Harvard Medical School and a pediatric neurologist and neuroscientist at Massachusetts General Hospital in Boston, contributed an article to the Autism Notebook Spring 2015edition, titled “Connections in Our Environment: Sizing up Electromagnetic Fields,” in which she details documented parallel issues that occur in cases of EMF exposure and autism. “There is a whole series of problems at the cellular, sub-cellular and metabolic levels and immune levels that have been identified in autism. And interestingly, for every single one of those problems, there’s literature about how EMFs can create those kinds of problems,” says Herbert. “The argument I made is not that it proves EMF causes autism, but that EMF can certainly contribute to degrading the physiological integrity of the system at the cellular and molecular level.”

She sees this type of radio frequency radiation as yet another element encountered in modern life, along with toxic chemicals, air pollution, stress, poor sleep and pro-inflammatory foods, which serve to degrade our health.

Why Is Wi-Fi in Schools Worse?

One might wonder why should I worry more about Wi-Fi in schools when radio frequency radiation today is pretty much everywhere? Rees would answer the growing levels of EMF exposure in everyday life is, in fact, a reality all of us will sooner or later need to confront. However, its persistent presence in schools, among children at the developmental stages who are most vulnerable to all forms of toxic exposures, is the first ingredient in a recipe for a perfect storm.

The second lies in the fact that industrial-strength Wi-Fi routers schools typically use are much more powerful than the ones you find at home. “These 5GHz routers are designed to go through cement, brick and to cover the campus, too,” says Rees, adding they’re also higher wattage and configured to be able to serve hundreds of users simultaneously.

Finally, there’s what Rees describes as the continuous exposures and cumulative, chronic effect of being bathed in EMF radiation eight hours a day, five days a week, 10 months a year. “This beautifully balanced body we have is being pushed by this outside energy source that’s perceived as a stressor. Your body needs to rebalance, it needs to rest and repair,” she says.

Rees points to studies confirming students and teachers experiencing signs of chronic electro-sensitivity ranging from fatigue, headaches and irritability to visual disruption, depression, dizziness and nausea. Says Rees, “There’s just a lot of cognitive and physical fatigue and therefore it impairs learning. How can someone really learn or teach in an environment where their head feels fuzzy and foggy and their reflexes are slow?”

Herbert says high levels of EMF exposure make us all, but especially children, less resilient and more vulnerable. “(Kids) don’t need any more extra stressors in their system. When they’re more stressed, they will probably be less attentive, more likely to have behavioral outbursts, learn less well and possibly get sicker depending on their vulnerabilities,” she says. “But no matter what resilience you have, it’s still eating away at your resources. Nobody is immune from EMF.”

Why Isn’t More Being Done?

Rees contends in many cases schools across the country are in denial about the negative effects of EMFs. She says they’re relying on the National Association of Independent Schools (NAIS) to give them the green light, which it recently did in what Rees describes as a woefully inadequate report. She wrote a scathing critique of it, maintaining that the report was poorly researched and dismissive of the facts.

“Everybody has been sold a bill of goods,” says Rees. “There’s been so much publicity and promotion and propaganda about how exciting technology is and how it’s so good for learning. But a lot of that isn’t true. And a lot of that is just marketing.” Herbert agrees, pointing to the increasing learning troubles children today exhibit in schools. “We think we’re putting in all these Wi-Fi devices so they can learn better, but you’re giving with one hand and taking away with the other,” she says.

Rees believes schools don’t want to go against the grain or admit they might have been wrong, especially when they just raised money to put in Wi-Fi and have to go back to donors acknowledging it was a bad choice. However, she says there are many countries around the world and a growing movement here in the U.S. taking steps to protect children from EMF radiation. From a hard-won ordinance recently passed in Berkeley, California, demanding electronics retailers warn customers of potential health risks associated with cell phone radiation to groups of parents organizing locally across the nation, voices of concern are starting to be heard.

What Can You Do?

Rees urges parents to band together and request schools do a thorough evaluation of the research and look at what the science is really saying. “There’s a hunger for the truth on this issue,” says Rees enthusiastically.

In the meantime, Herbert believes it’s crucial to take steps to combat the effects of intense, prolonged EMF exposure. “All of these things are wearing us down and unless you take measures to reduce what’s wearing you down and increase the protections of what you’re doing, you’re getting unnecessary exposures.” As a proactive approach, she advises families to eat healthy diets of fresh fruits and vegetables, turn off cell phones and Wi-Fi when not in use and unplug all non-essential electronic appliances before going to bed.

Herbert says in many cases children experiencing symptoms have made impressive turnarounds after detoxifying from EMF exposure. “When you give the cells a break from the unremitting stress, they can actually bound back and have better functioning, better behavior, better learning and a lot less setbacks and meltdowns.”

Rees says turning off cell phones in the schools and connecting computers to the Internet through Ethernet cables would be a major step forward, even if it might present some initial design challenges. “Not only is it safer – it’s a faster connection, it’s more pure,” she says. “There’s absolutely no reason to have these kinds of transmitters blanketing people with radiation.”

10 Elements of an Electromagnetically Clean and Conscious School

Read on for Rees’ top 10 tips for schools serious about reducing EMF exposure. A more detailed list can be found at tinyurl.com/o57jpph.