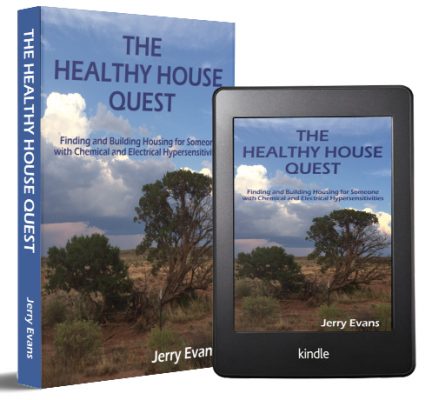 “Having a roof over my head was something I took for granted until I had to flee my home and move to an austere camp for environmental refugees.” Jerry Evans, author

Jerry Evans was living a comfortable life as an engineer when he began experiencing severe pollen allergies. Put on a weekly regimen of allergy shots which were ineffective – but which doctors promised would eventually work – Evans was often so debilitated during pollen season he would become dizzy after 15 minutes being outdoors, “barely (able to) stand upright.”

His journey from doctor to doctor, and house to house, is extraordinary, and told directly, clearly, and expertly in his book, The Healthy House Quest: Finding and Building Housing for Someone with Chemical and Electrical Hypersensitivities. It is a journey that lasted decades, taking him from Ohio to New Mexico, Arizona, and Texas, with lots of stops in-between. His health took a similar journey, from pollen allergies to multiple chemical sensitivities, and finally electrohypersensitivity, leaving him unable to live in any conventionally built environment.

Evans allows us to take the journey with him and puts it into historical context by discussing the origins of health migration to the Southwest in the 1800s, the origins of the first intentional communities for the chemically sensitive. In doing so, he clearly illustrates that when it comes to those with chemical and electrical sensitivities, one size doesn’t fit all.

The most valuable aspect of the book is his detailed descriptions of how he finally found the right home – something he built using the hard lessons of decades. Through a series of trials and errors, moving from home to home, Evans was able to identify the particular sources that triggered him, and eliminate them one-by-one by making appropriate materials choices, and necessary compromises. He talks about struggling with the sense of isolation brought on by not being able to live close to others lest their choices (from cleaning products to the burning of wood and leaves) impact him. He delves into the psychology of navigating a world where many people don’t believe the severity of his symptoms, ascribing to them psychosomatic origins, and how he discovered a community of similarly affected people, all sharing information, fellowship, and comfort.

The structure of the book is also useful as a general blueprint, with chapters such as Finding the Land, Planning the House, Choosing the Materials, and The Inside Job.

Finally, he shares a valuable bibliography for those who may be contemplating a similar move, links to organizations working with the environmentally ill, healthy housing websites, and even documentary and music suggestions.

Even for those who are not struggling with environmental sensitivities, The Healthy House Quest is an interesting and enlightening read, and highly recommended.

It is currently available on Amazon in paperback and Kindle formats.