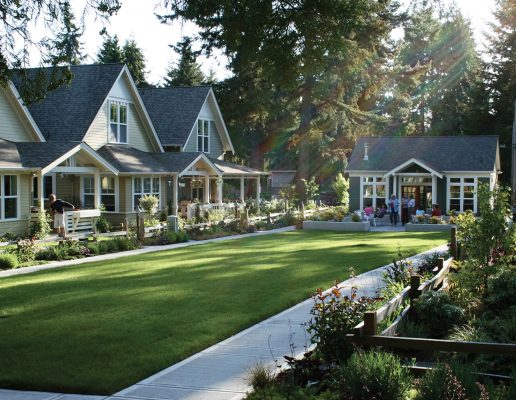 How do we reconcile human health and ecological living in our cities today with the challenges of air, land and water pollution, the automobile, social problems, and zoning restrictions?

How do we define and create “well-planned” communities?

How can we meet the needs of community, families and individuals of all ages?

At the time of the original building biology writings in the 1970’s city planning theory had resulted in a new sort of ailment. The worst slums of the industrial revolution (at least in Western Europe and North America) had been successfully sanitized through slum clearing, and the implementation of draconian zoning laws.  But the post war cities now suffered from a new form of ailment characterized by sterility and alienation. Zoning laws and city plans based on the automobile created great separations between work, schools, shopping and homes. Dominated by the implementation of unproven and simplistic theories of urban renewal that were widely adopted, the very fabric that makes a great city great was completely ignored. Decades later these experiments were unanimously declared to be failures.

The Building Biology recommendations for city planning can be summed up in a single sentence: Through appropriate urban planning, transform cities from soulless landscapes and restore them in to life-sustaining and life-affirming centers of human and environmental sustainability.

There are six main areas that Building Biology addresses and underlying all is the holistic approach to human health and planetary ecology from the scale of individual homes as well as to the communities that surrounds them.

The Building Biology criteria for community planning, although formulated decades ago, are even more relevant today as our cities continue to grow in number, density and size and an increasing number of their inhabitants face the problems of unhealthy and stressful living conditions.