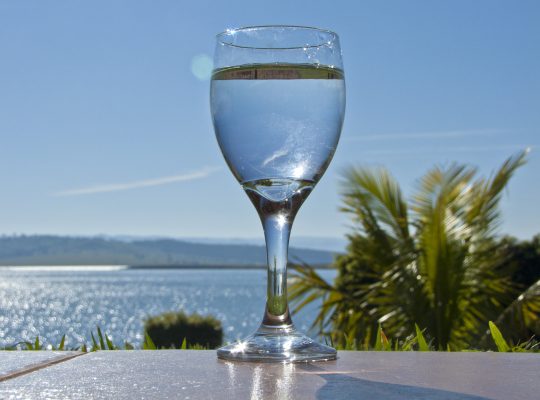 Is the water that you drink and bathe in healthy? If you are on a community water system the US government requires them to publish a CCR (Consumer Confidence Report) or Annual Water Report and make it available to the public. If you get water from a private or shared well, you will need to test your own water. There are a broad range of solutions for filtering contaminants out of your water so that you and your family can receive the healthiest water possible. The first step is finding out what is in it. Following is a list of common concerns and filtration strategies for each.

Disease due to waterborne contaminants can be transmitted on foods that have been washed in tap water, by breathing in the spray such as in a shower or near a decorative fountain, or by direct consumption. Common contaminants found in the water supplied to indoor environments include but are not limited to: Microbial, Inorganic (includes lead, asbestos), Organic (other than microbial), and Pesticides and Herbicides.

Microbial contaminants include living organisms, such as bacteria, parasites, and algae, as well as viruses (viruses are not considered to be alive because they cannot reproduce without a host cell –your own cells, for example). While waterborne disease are most prevalent in developing countries, the United States and Canada are seeing an increase in the occurrence of waterborne disease associated with viruses and parasites, one prominent example being Legionella bacterium, which can cause a serious pneumonia-like infection. The only home filter systems capable of filtering down to the viral size range are the reverse osmosis or ultra filtration-type membranes, or ceramic filters. It should be noted that activated carbon filters can become a breeding ground for bacteria and hence should never be used on a source of water that is not bacteria free.

Inorganic contaminants are elements not bound to carbon and hydrogen. The term inorganic includes metals (and their alloys, like iron, copper, aluminum, brass, bronze), minerals (such as salt, asbestos, silicates, arsenic, fluoride) and mineral-based chemicals and non-metallic elements, like silicon, phosphorus, arsenic, lead, fluoride, and chlorine. Some metals are necessary trace nutrients for our metabolic biochemistry, but can become toxic in too high a dose, such as Chromium, Copper, and Selenium. Other metals are toxic only, such as Lead, Arsenic, Beryllium, Cadmium, Thallium, and Mercury, with no known safe level in the body. The best means known to remove inorganic contaminants from water is reverse osmosis.

Organic contaminants are those which have a bond between a carbon atom and a hydrogen atom (CH), and include microorganisms and manmade organic compounds. Many of them are naturally occurring organic chemicals, and innocuous. The organic chemicals we consider water contaminants are man-made, synthetic chemicals such as solvents, petroleum-based chemicals, pesticides, herbicides, and PCBs.  Since the 1930’s, production of synthetic organic chemicals has increased almost exponentially, and only a relative handful of them are directly regulated via the Safe Drinking Water Act. Organic chemicals have been dumped into our surface waters by industrial plants since manufacturing began. This dumping, coupled with the constant runoff of agricultural chemicals into surface waterways, has led to our present situation where almost all fresh water shows some signs of organic pollution. The sole answer for removal of most synthetic organic chemicals is activated charcoal. Probably the best overall scheme for protection is to have a large capacity activated charcoal filter at the point of water entry into the house, with an additional stage of reverse osmosis for drinking and cooking water.

Pesticides and Herbicides are a subset of synthetic organic chemicals that deserve special attention as water contaminants.  Mostly petroleum based, these chemicals started finding widespread use in the 1940’s, and the first warning signs were not evident until the early 1960’s when scientists began to realize that many of these chemicals are very long-lived in the environment, and cause harm to wildlife well beyond their intended targets. Since these compounds can actually become concentrated in the fat cells of animals from their food sources, they ultimately end up in us too. For example, even though DDT has been banned for decades, it can still be found in the breast milk of new mothers. These chemicals get into our water from agricultural runoff, spraying on private residential lawns and golf courses, aerial spraying for bug control, and countless other means. The most effective means of removal for pesticides, herbicides, and other synthetic organic chemicals is reverse osmosis. Activated charcoal filters can also be very effective at removing pesticides, but they have limited capacity and need to be maintained diligently.

The World Health Organization states that 80% of infectious diseases worldwide are waterborne. If your tap water has not been filtered by the processes cited here above, you are likely drinking, cooking, washing your food, and bathing with contaminated water. It is worth noting that viruses and single-celled parasites are resistant to extermination by chlorine, itself a contaminant, which is usually the first line of defense in most parts of the United States against microbiological contaminants.